How to Give Up 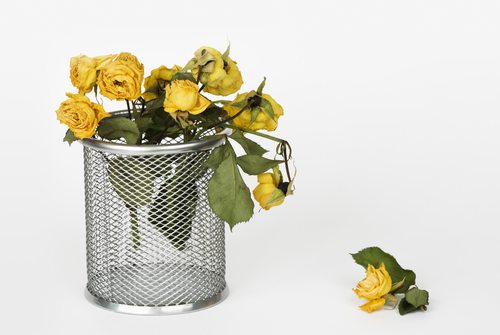 I’ve been working on a blog post for the better part of two days. The topic I chose just isn’t coming together. I checked in with the perfectionism part of my brain to see if it was sabotaging me but that wasn’t it. Try as I may, my ideas on that subject are not coming together in a cohesive way.  Last night I told my husband how frustrated I was and he said, “why don’t you just give up on this one? It’s summer, you should give yourself a break.” To which I responded, “No, I shouldn’t! I’m committed to this! And I’ve been working on it for two days, I can’t just give up.”

I went to bed grumpy about that dang blog for the second night in a row.

I woke up thinking about sunk cost bias. Sunk cost bias is our tendency to stick with something despite evidence it’s not working because of the time and money we’ve already invested. Basically throwing good money after bad. Or good time and energy after time and energy already spent. On a small scale: me tormented by whether to give up on a piece of writing. Large scale: a country figuring out whether to pull out of a war when it’s more expensive than anticipated and a strategy isn’t working.

I work frequently with people who are wrestling with sunk cost bias, even if we aren’t naming it that. When we work through how to manage time on people who are floundering or on projects they no longer believe in, one of the factors we consider is the energy already invested. Have they worked with someone long enough to feel sure about a decision to remove them from a role? Should they give up on a spiraling project or forge forward and try this or that? There’s never an easy answer…which is why I have a job.

Sunk cost bias is deeply embedded in decisions to quit jobs or switch careers. As someone in a second career, I can fully attest to how painful it is to make the decision to turn away from something we’ve been fully committed to in every way. It usually takes years to sort through all the factors that enable someone to feel good about choosing a new direction.  Looking back, I can easily see how much of the investment I made in my first career is fundamental to success in my second one. I can see the ongoing value of what I learned both from being fully in that world and then getting out. But in the midst of the decision to actually let something go, it can be hard to believe in future benefits. Even if we are miserable in our current situation, letting something go can feel like failure. Even if we see no value in continuing, deciding not to can just feel like giving up.

We are a culture of go-getters. Never quitters. In the movies the main character has to almost lose something at least twice but stick it out anyway before we have our sufficiently tested hero. How then can we turn away and move on from things without feeling like quitters? How do we know we are being wise in letting something go rather than cowardly or lazy for giving up?

As these decisions get bigger, they of course get more sticky and complicated, so they require more time and resources (friends, coaches, mentors, parents) to navigate them. But we can be mindful about how we manage sunk cost bias on a more daily basis. If you pay for an expensive meal, do you keep eating after you’re full because you’re thinking about the five dollars still on your plate? If you decide to paint your bathroom yellow and realize you hate it half way through, do you keep painting because you already bought the paint and towels to match? If you write a story that won’t show you an ending, do you dig in day after day or put it on a shelf? (What story isn’t getting written while you tackle that one…this post only exists because I gave up on the other one.)

There are no right answers. We will always have to face decisions about when to be tenacious and when to let go. But it’s summer and life is short so for now, let me suggest that if you’re half way through a book you aren’t loving, don’t finish it! If you bought tickets to an outdoor concert but it’s drizzling and you’re exhausted, don’t go! If your friend won’t take the advice you’ve been giving them all year, stop giving it to them! Look for all the little ways you can give up for good reasons. To remind yourself that letting something go can be as brave as fighting for it with all your might.